The first coin in the Luminous Marine Life series.

With our series Luminous Marine Life we dive into the depths of the oceans. To celebrate the United Nations Decade of Ocean Science for Sustainable Development, we are embarking on an undersea adventure that shows just how fascinating and colourful the underwater world can be. With a mintage of 65,000, the 12 innovative 3 euro coloured coins in the series, 4 of which will be issued each year over 3 years, will not only make your eyes light up, the coins actually do that themselves thanks to special lighting effects.

As improbable and magical as the sea creatures featured on the coins may seem, they really do exist. Even though some of them live in the perpetual darkness of the deep seas, where no ray of sunlight penetrates, they all have extraordinary luminous qualities. They flash, sparkle and glow and change colour when necessary.

The same applies to the coins themselves, which glow when exposed to ultraviolet light in a way that is both exciting and piques our sense of scientific curiosity. A dedicated ultraviolet torch will help you to experience the charming creatures of Luminous Marine Life in full.

The series’ dedicated UV torch gives off a special type of light that appears to bring the underwater creatures on the coins to life as they change colour and glow vividly. Tiny creatures, which only become visible when you shine the UV torch on them, also appear here and there next to the main characters in the series, adding an element of surprise.

On some of the 12 coins, only the edge of a porthole can be seen, beyond which there is only emptiness and darkness. Coins on which nothing can be seen? Is that some kind of bad joke? Not at all. Shine the beam of the UV torch on the coins and you will be amazed.

The swell shark gets its name from its ability to inflate itself to roughly double its normal size by swallowing water as a form of protection from predators. But that’s not its only amazing property – the hero of the second coin in the Luminous Marine Life series can also fluoresce green all over.

To do so, the swell shark converts incoming ultraviolet light, or blue light, into green light. A special pigment in the sharks’ eyes enables it to see the neon green of its conspecifics. Human eyes do not have that pigment, which is why we need an ultraviolet torch to see the swell shark’s green glow. The molecules that make swell sharks fluoresce are unique in the animal world. The light areas of their skin glow more intensely than the dark ones. Why the shark does that is not yet fully understood, but it is assumed that the process helps swell sharks to recognise each other and to distinguish between the males and females of the species. It could also be a form of camouflage and because the molecules offer protection against bacteria and algae and just happen to glow. 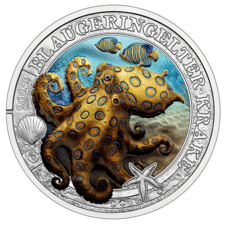 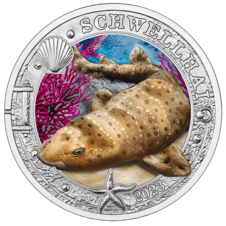 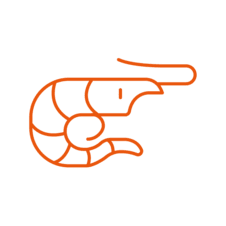 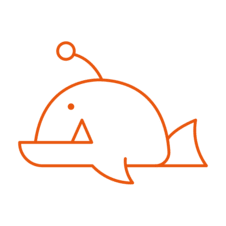 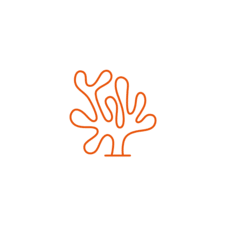 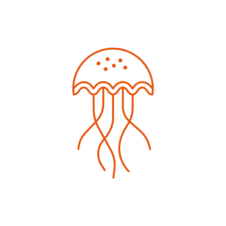 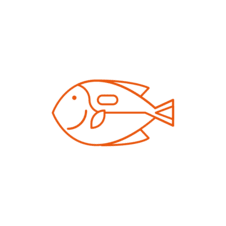 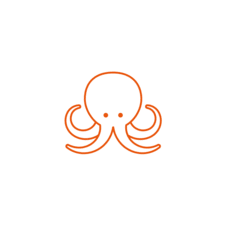 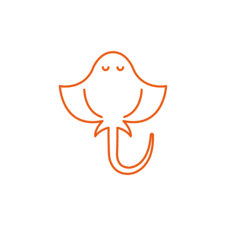 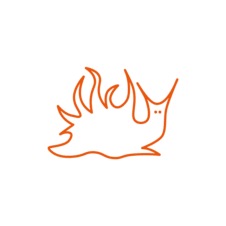 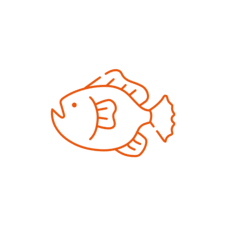 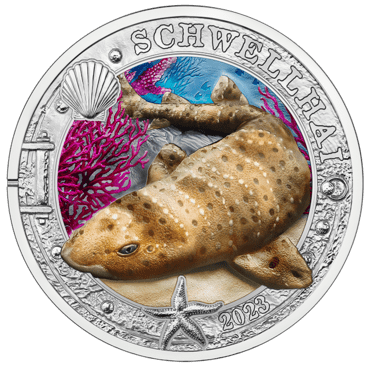 The swell shark gets its name from its ability to inflate itself to roughly double its normal size by swallowing water as a form of protection from predators. 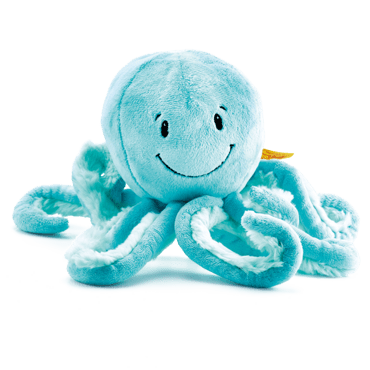 The fun does not stop with the coins themselves – illustrations and information are also hidden here and there throughout the Collector album. By examining the pages with the torch, with a bit of luck you may discover them. 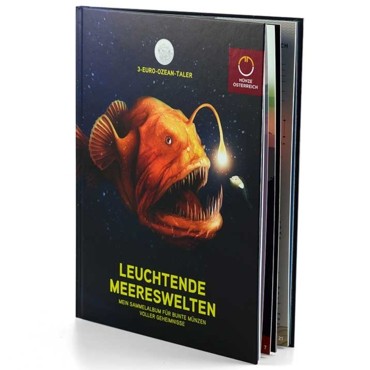 This Collector album not only stores all 12 coins in the Luminous Marine Life series but is also crammed with fascinating information about the 12 sea creatures that feature on them. 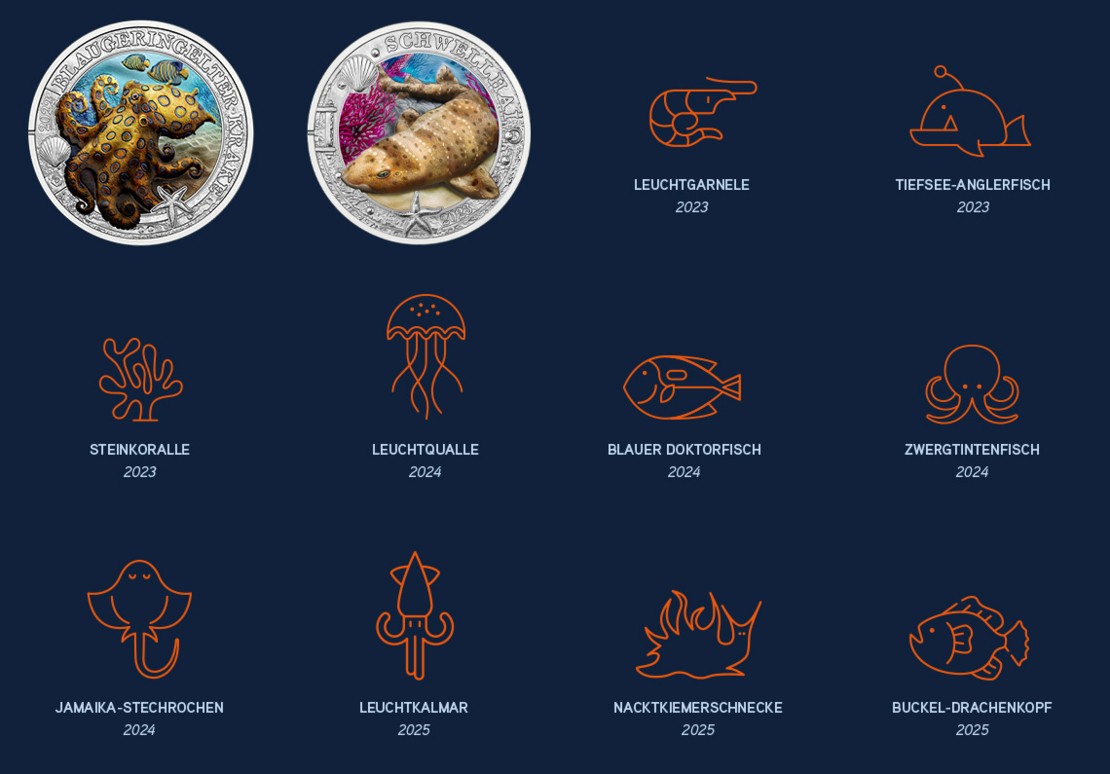 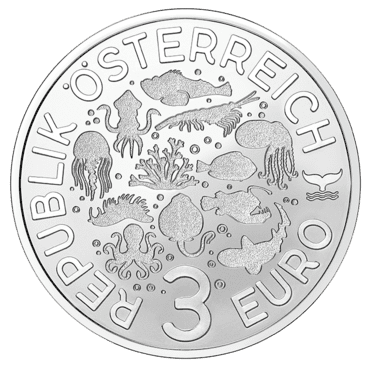 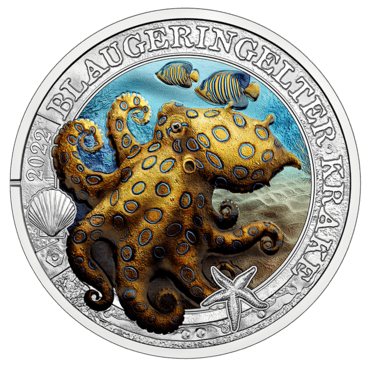